Unfortunately, I'm not permitted to enter this guy for Crystal Brush.  (How's that for a bait-and-switch?...I'll come back to Crystal Brush shortly....)

This 'toadally' awesome sculpt comes from the gifted hands of Allan Carrasco.  This is my first attempt to paint a bust, and it was a real pleasure to work on.  The name of the character is Captain Sapo, and, according to the backgrounder, he's the foreman for a crew of sewer workers.  You can see that I added some "occupational hazards" on his work tunic.

I painted it for the WAMP forum's "community painting project", celebrating the release of Sapo, with an event where WAMP members all paint the same piece and compare WIPs and final results.  It's a great exercise to trade ideas and compare styles.  Everyone who participates gets a discount on purchasing Sapo, too!

The deadline for the challenge is end-of-March, but I cranked through painting my copy, since I have so many projects that all need to be done by end-of-March, in time for Crystal Brush.  Crystal Brush allows only pieces that have not been in a competition or published in a professional publication, online or traditional.  The Sapo challenge is probably a grey area, but there's no point in risking being disqualified, if I entered it in Crystal Brush.

I worked on my Sapo from February 1st until February 15th.  Which is why I haven't posted to the blog for such a long time -- in the spirit of the WAMP challenge, I posted my step-by-step, WIP progression exclusively on WAMP.   Here's the link, if you're interested in how I approached this piece.  And if you go up one level in the forum discussion, you can view all the other WIPs that other WAMPers are doing.  I figure I spent somewhere between 12 and 16 hours on Sapo, from package to plinth.

So getting back to my Crystal Brush conundrum.  I had only one solid project in the works.  Everything else has been sketchy, either for eligibility or for display competition, e.g. Scar-Scath (Mierce Miniatures challenge), Cojo (gaming piece with apparent joins), etc.

Luckily, an opportunity popped up that kills many birds with one stone.  On the DragonPainting forum, they proposed a monthly challenge, the theme of which would be to paint Rackham figures in the style of Rackham studio painters.  This is something I've had as a goal ever since I got back into the hobby.  Not only do I finally feel confident enough to paint my first Rackham figure, but this opportunity arrives on the heels of my recent acquisition of quite a selection of Rackham Confrontation figures.  So I decided to paint not one, but six figures!  Well, really twelve.  Since they're goblin cavalry -- riding giant rats.  So this project will satisfy the monthly challenge on the forum; give me something to enter for Crystal Brush; and add a new unit to my Orcs & Goblins army for Warhammer.

The DragonPainting monthly challenge isn't a publicly announced competition, and the prize is a random draw (to encourage and reward participation), so it doesn't conflict with the Crystal Brush rules.  To be on the safe side, I'll inform the organizers to withdraw me from the prize draw.

So this is all pretty ambitious.  Here is how things are getting along.

Here is the idea I have for a plinth for Mean Jellybean.  It was quite a bit of work to shape the wood and chisel the hollow, as well as carve up all of the MDF strips. 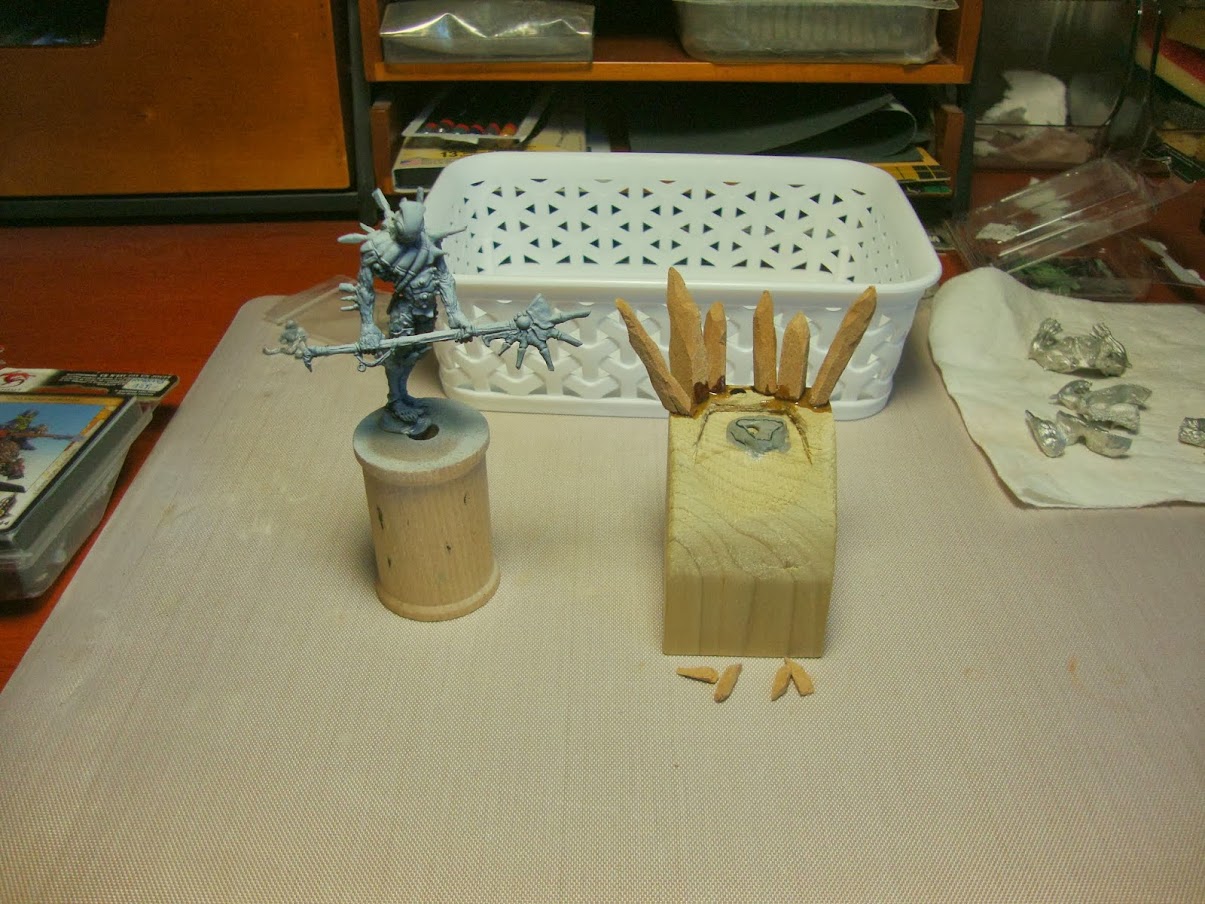 Adding more form to tie it together and provide a base for ground.  And skulls.  I wish I had more.  I may need to open up some boxes of Warhammer Undead models. 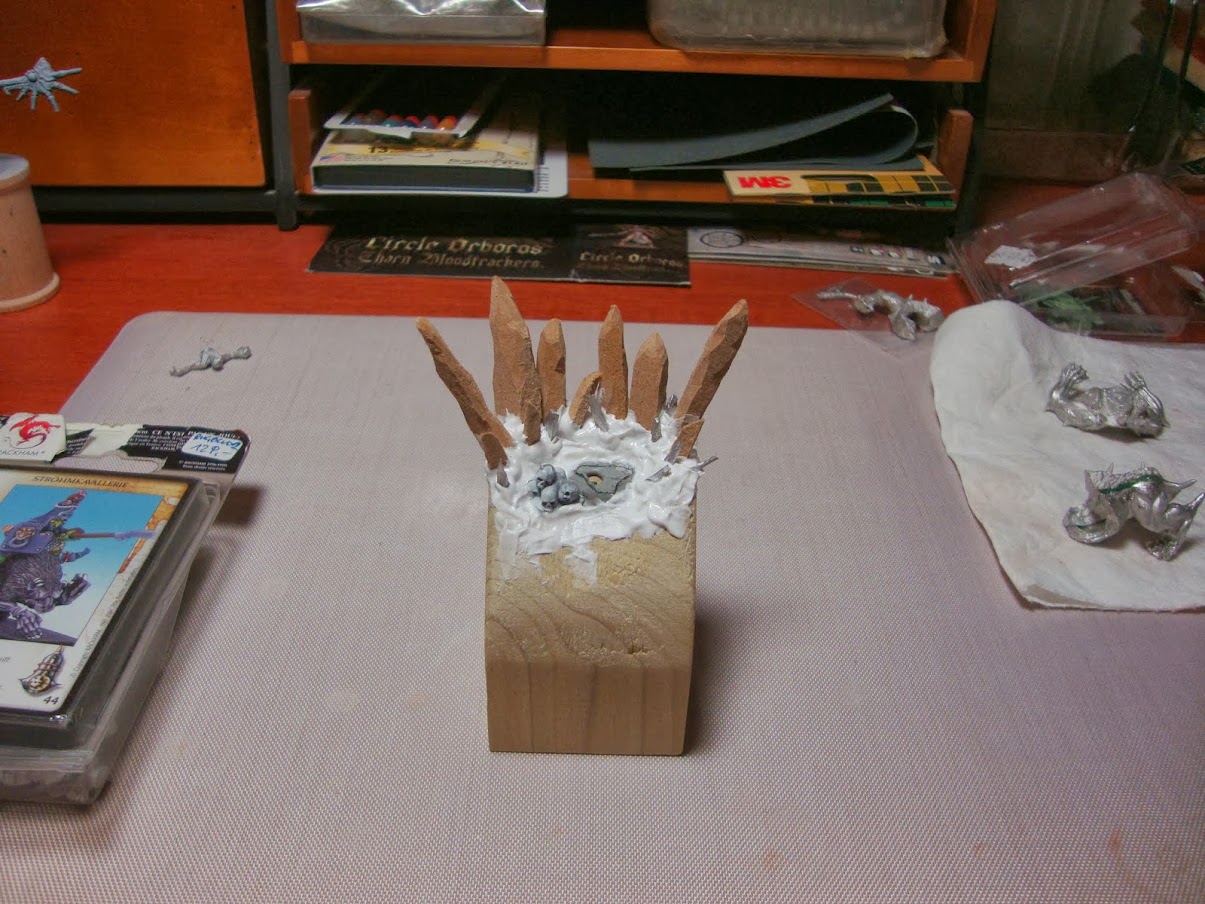 Starting to work on the Goblin Rat Riders.  Fitting in some work for Malifaux, too -- that's RazorSpine Rattler in the back center.  I also got my spare body half from Game Zone, so I'm working on Cerberus as well, drying on the left.  I use 2-part epoxy instead of superglue, which takes a lot longer, but it's a lot more durable.  I'm a glutton for punishment.  You can see where I'm gluing zinc washers to bases so that they'll adhere to magnetic sheet, for transport.  I have square pieces for the cavalry bases. 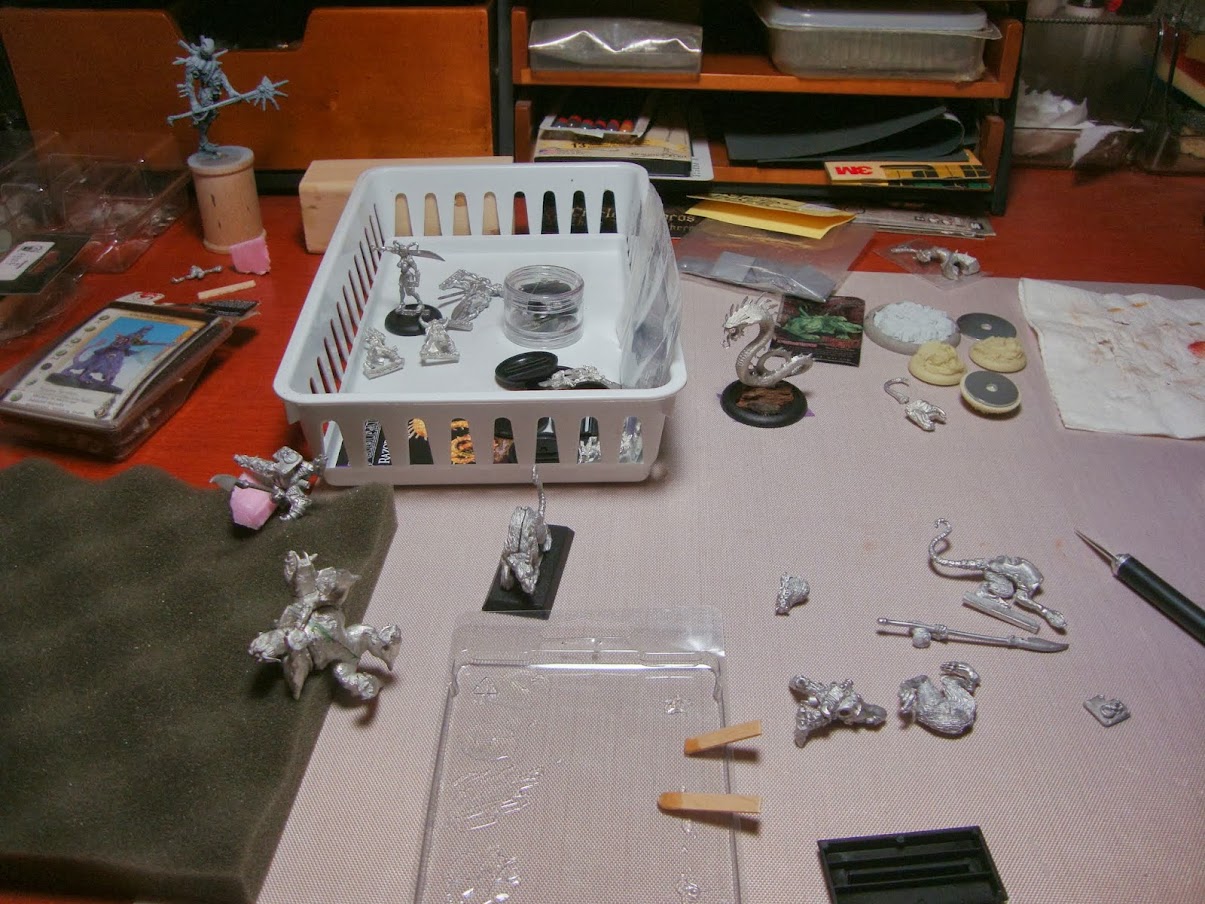 I also have to tap screwholes into the plinth, so that it will travel securely on the plane.  I tapped the plinth for Sapo, too.  I'm not entering him into the competition, but I'm bringing him along so that I can show him to Jeremie Bonamant Taboul, who painted the studio version. 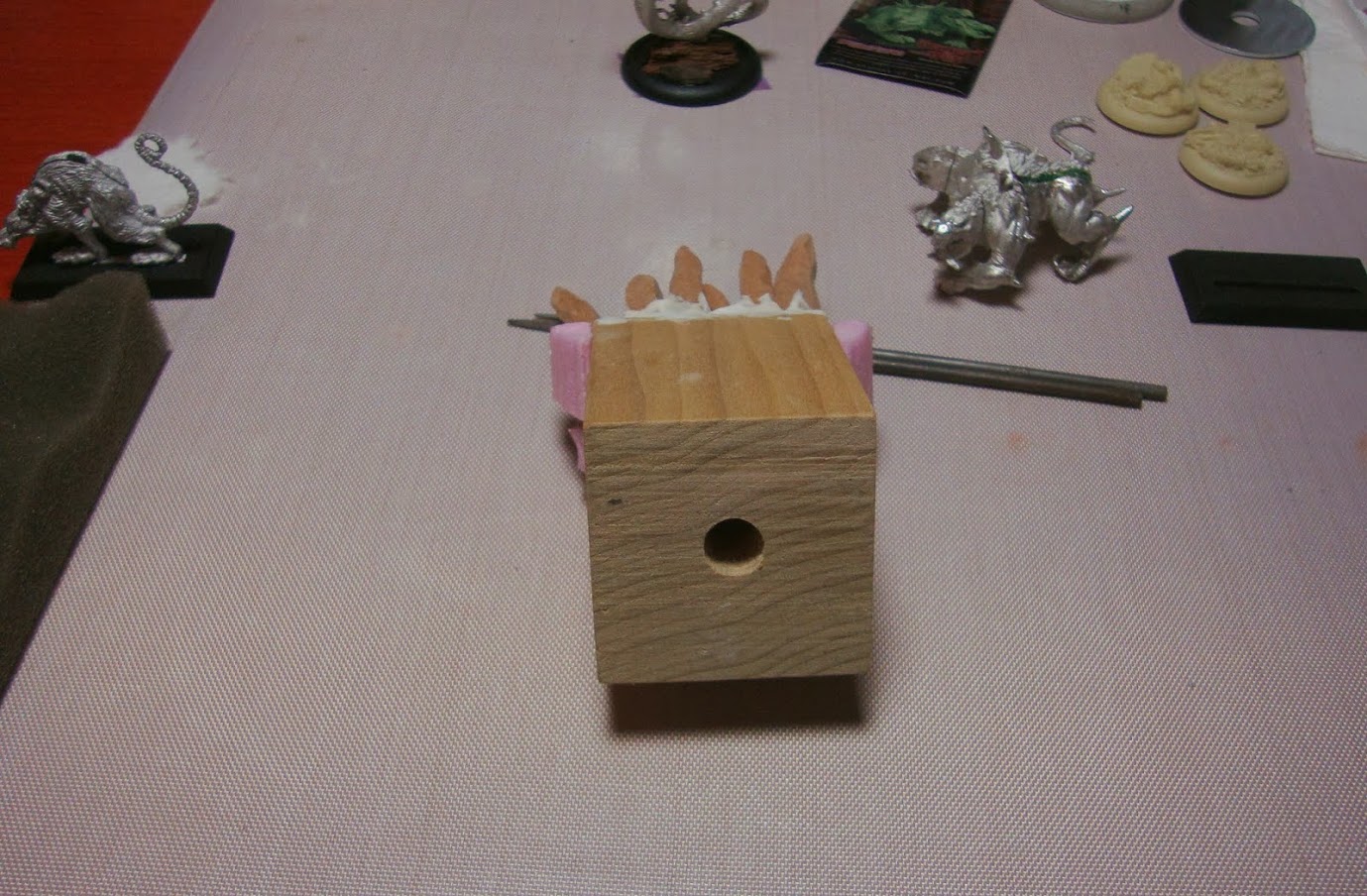 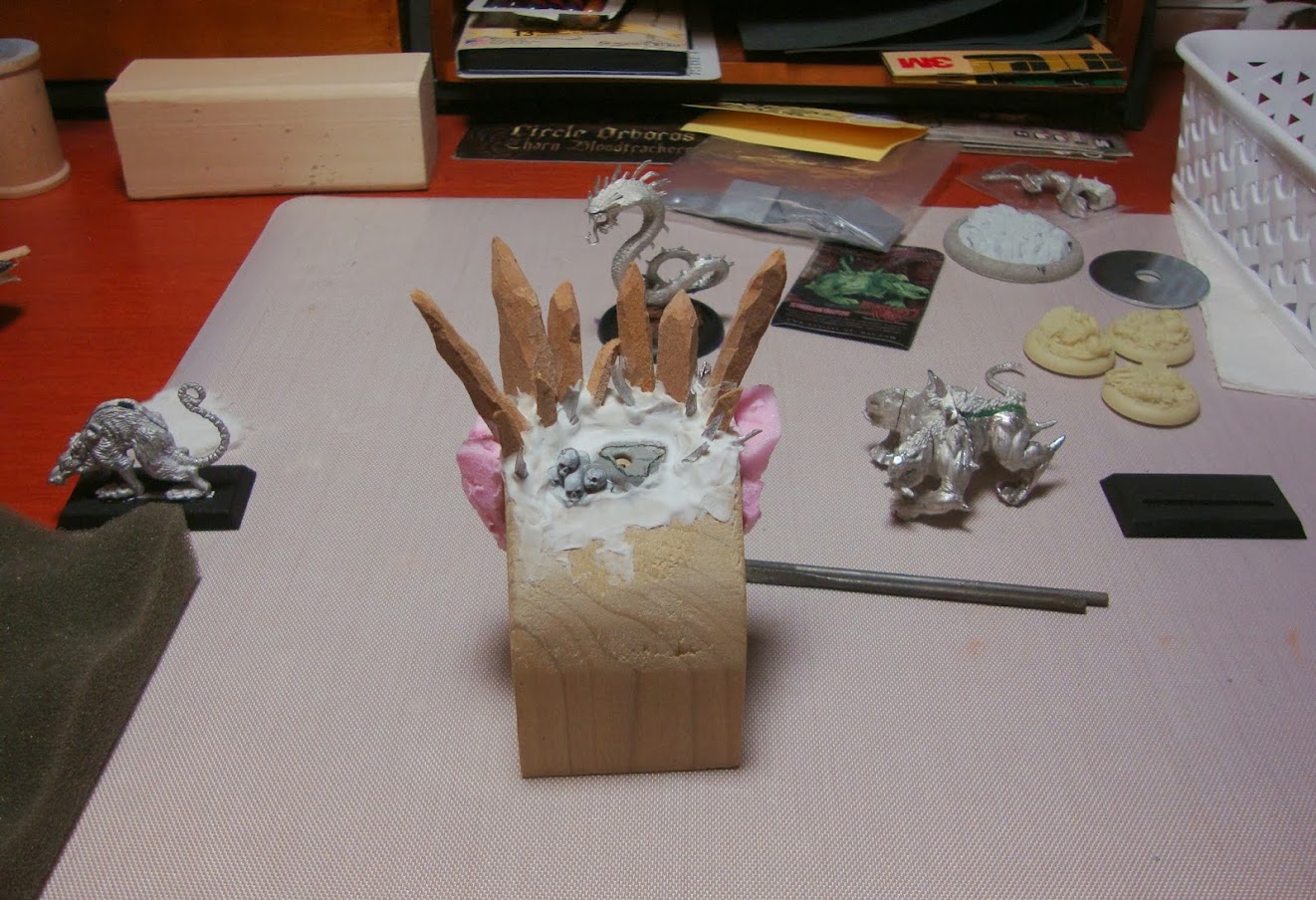 There is a lot of green-stuff work to do.  This project is going to take forever.  Hopefully, the need for green stuff will diminish, when I reach the last three Rat Riders.  The first three are from the 1st Edition of Confrontation, from the late 90's.  The sculpts are fantastic, unprecedented for their time, but they don't fit together very well.  I think the metal still has some lead content, since it's on the soft side and relatively easy to work.  But the gaps are killer.  The last 3 models are from a box set that came out for 2nd or 3rd Edition, and they're another notch higher in quality, although I haven't tested the fit yet. 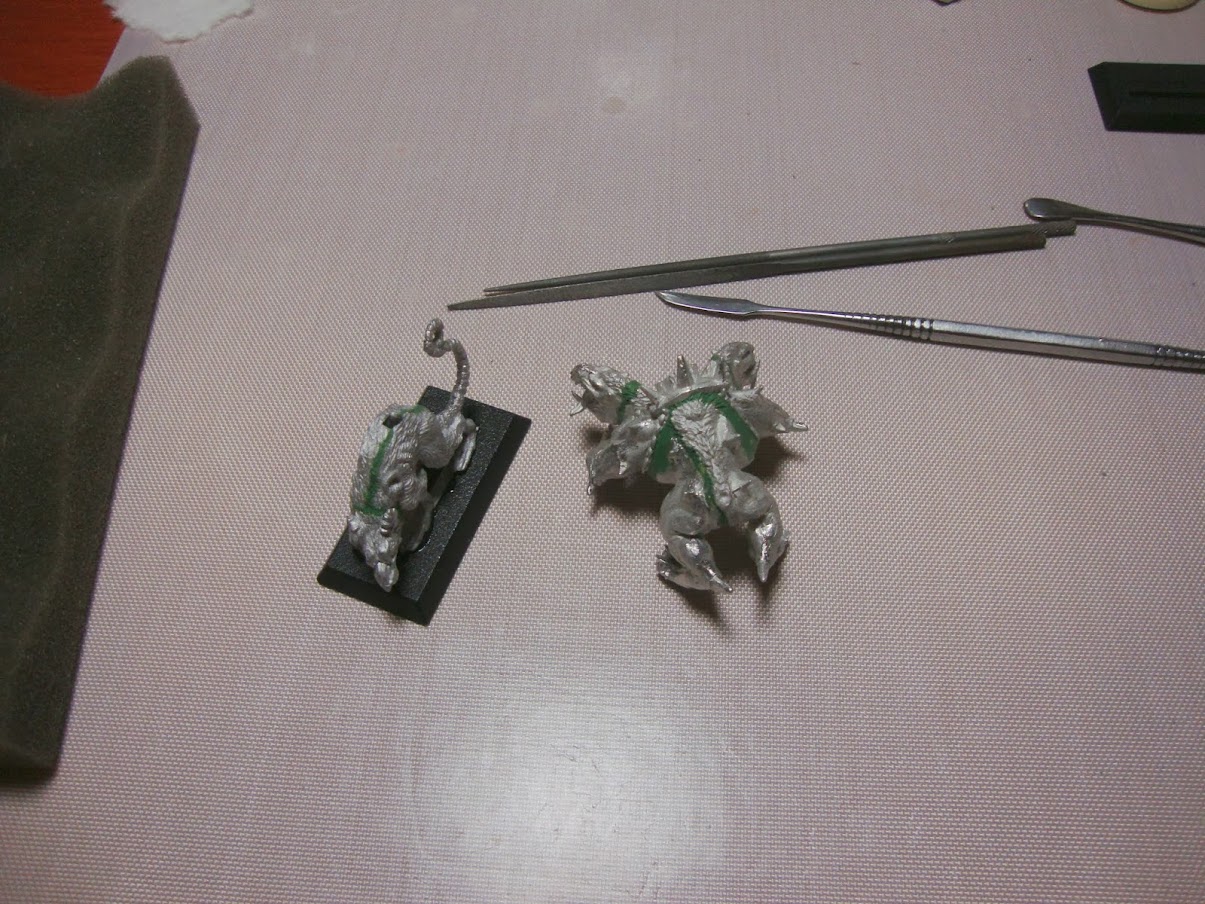 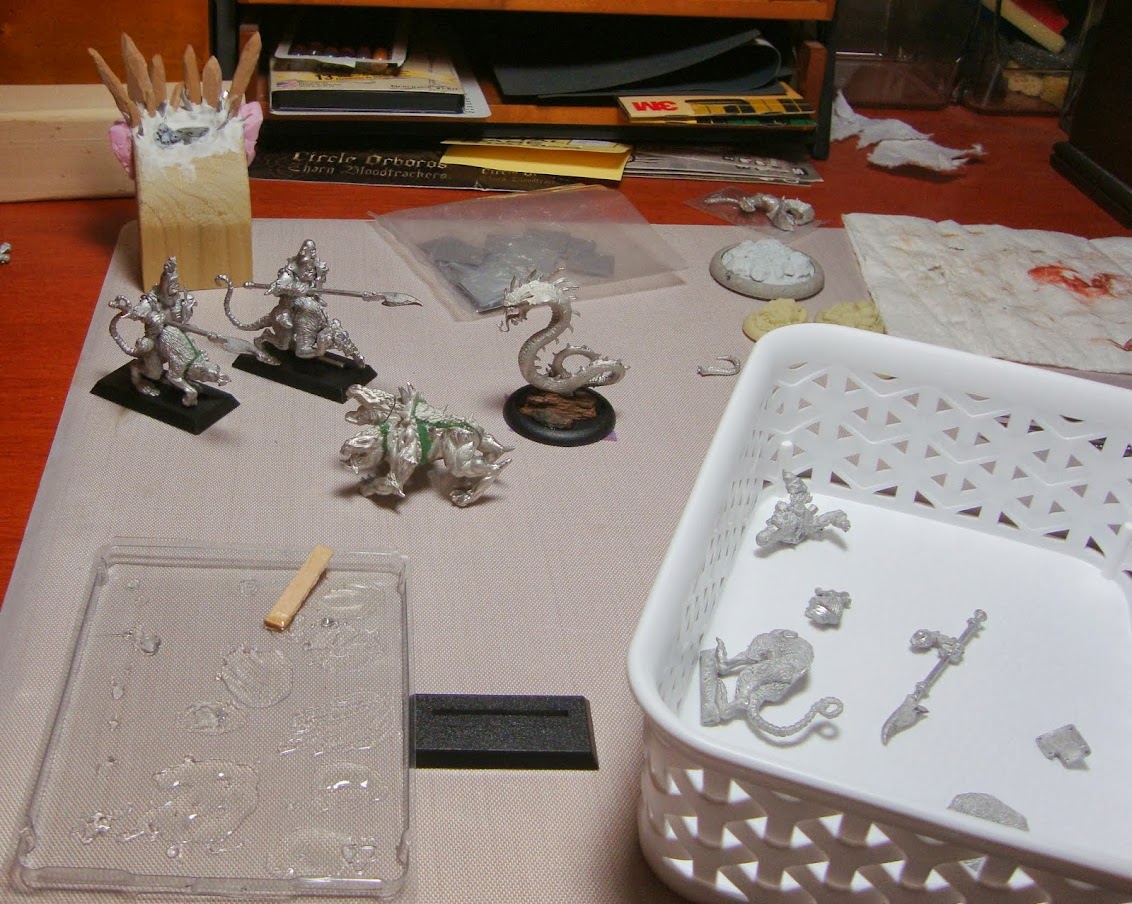 I need to finish the green stuff on the top Rat Rider and the Cerberus.  The third Rat Rider just finished prep and filing, and he's ready for washing.  At this rate, it's going to take me the rest of the week and probably next weekend to just assemble all these damn models!  I tell ya, it's the modeling that is the time-sink in this hobby.  The painting  goes by almost too fast, in comparison!
Posted by Mike "Shades" Schaefer at 11:39 PM 2 comments:

On the modeling table 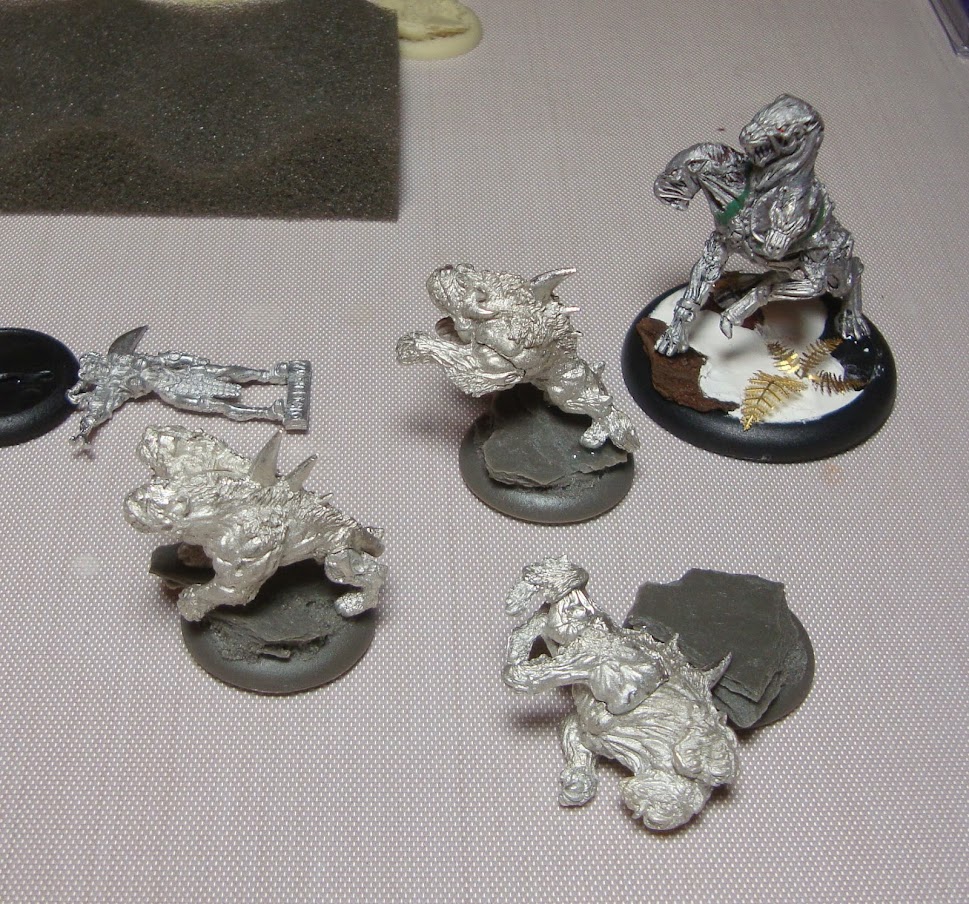 Avatars of War replied to my query concerning the mispacked Cerberus, and they say they're going to send me a proper body half.  Yay!  Unfortunately, it will probably take a few weeks to be shipped from Spain.

In the meantime, my Confrontation acquisition arrived, and there's a Dirz Cerberus in there that will make a good substitute.  He's the guy in the upper-right, stripped with Simple Green, seam-filled, and semi-based.

All of the models pictured are potential proxies for my Marcus crew for Malifaux.

The Chaos Hounds are from Game Zone.  The pieces fit pretty well for a change.  I forget who makes the slate bases.  A buddy pointed out that the second-wave beta is finalized, and the Guild Hounds happen to be Beasts, so Marcus can hire them for his crew.  There's a hound in the Resurrectionists, too, which will make an even closer complement to this particular Cerberus model, given the torn skin and all.  And how cool is it that some of the Chaos hounds have two heads?  Cerberus pups!

The model laying down is another Confrontation miniature -- a Kelt Fianna.  She might make a good sub for Myranda.  But I'm leaning more towards a Tharn Bloodtracker from Privateer Press (from Hordes, Circle of Orboros).

So this theme will be a lot tighter for Marcus.  A hunting party of beastly hounds, led by an alpha Cerberus, commanded by Myranda and Marcus as the super-alphas.  And then accompanied by a crazed, angry ape.  Just 'cause.
Posted by Mike "Shades" Schaefer at 10:04 PM No comments:

I'm getting some priming done on these models, now that I finally have the modeling part done.  I delayed priming the Crystal Brush candidates until I prepped two more Electrical Creations that I can add to my Malifaux games.  I'm also toying with adding other models to Marcus' crew.  The Silurids and Molemen that I already have painted just don't jive thematically with Cojo, so I'm looking at proxies for Myranda, Sabertooth Cerberus, Razorspine Rattler, Hoarcat Pride, Jackalope, and Guild Hounds.

But on to the task at hand.  Here, I've only primed the undersides and undercuts with black, leaving bare resin or metal on top.  The one exception is Mean Jellybean on the right, since he has a lot of deep recesses that I want to make sure get primed. 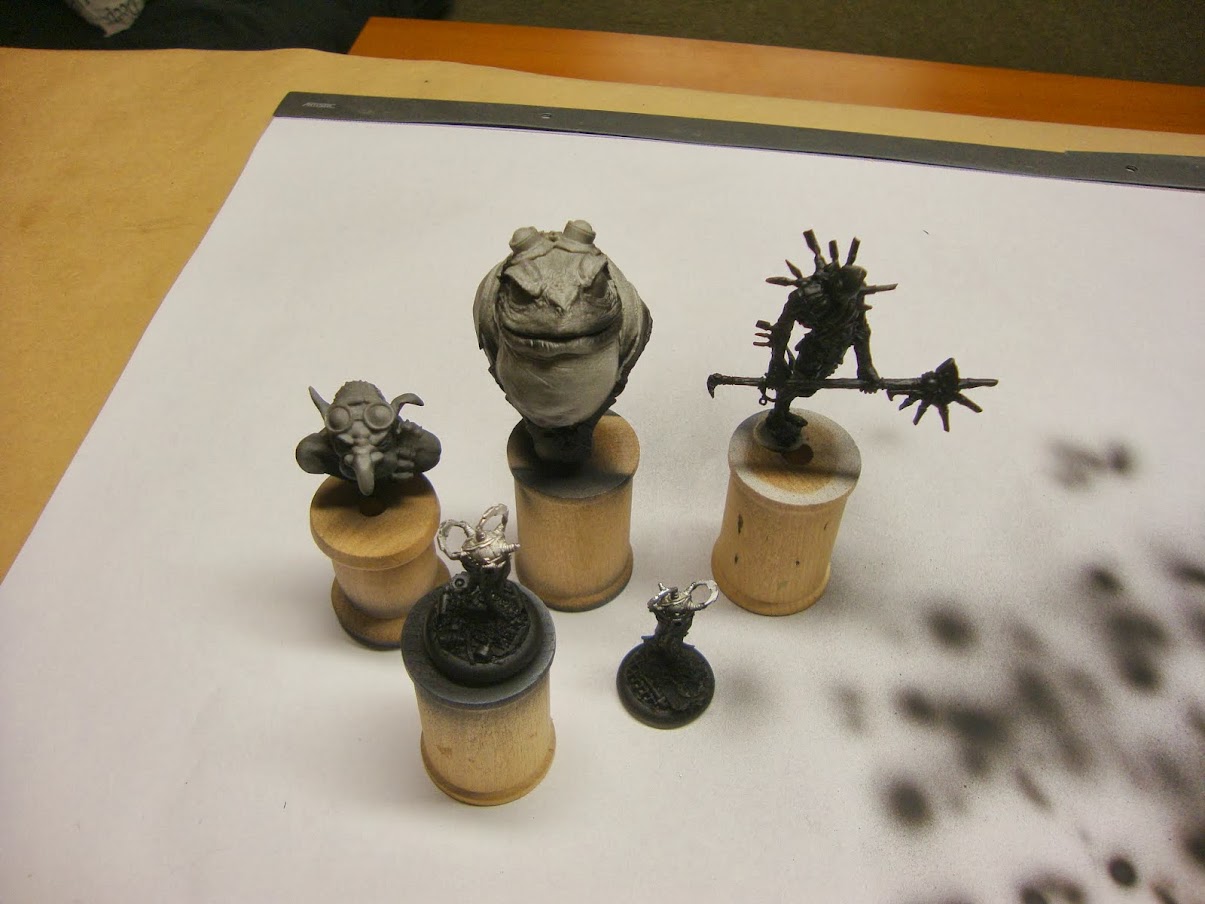 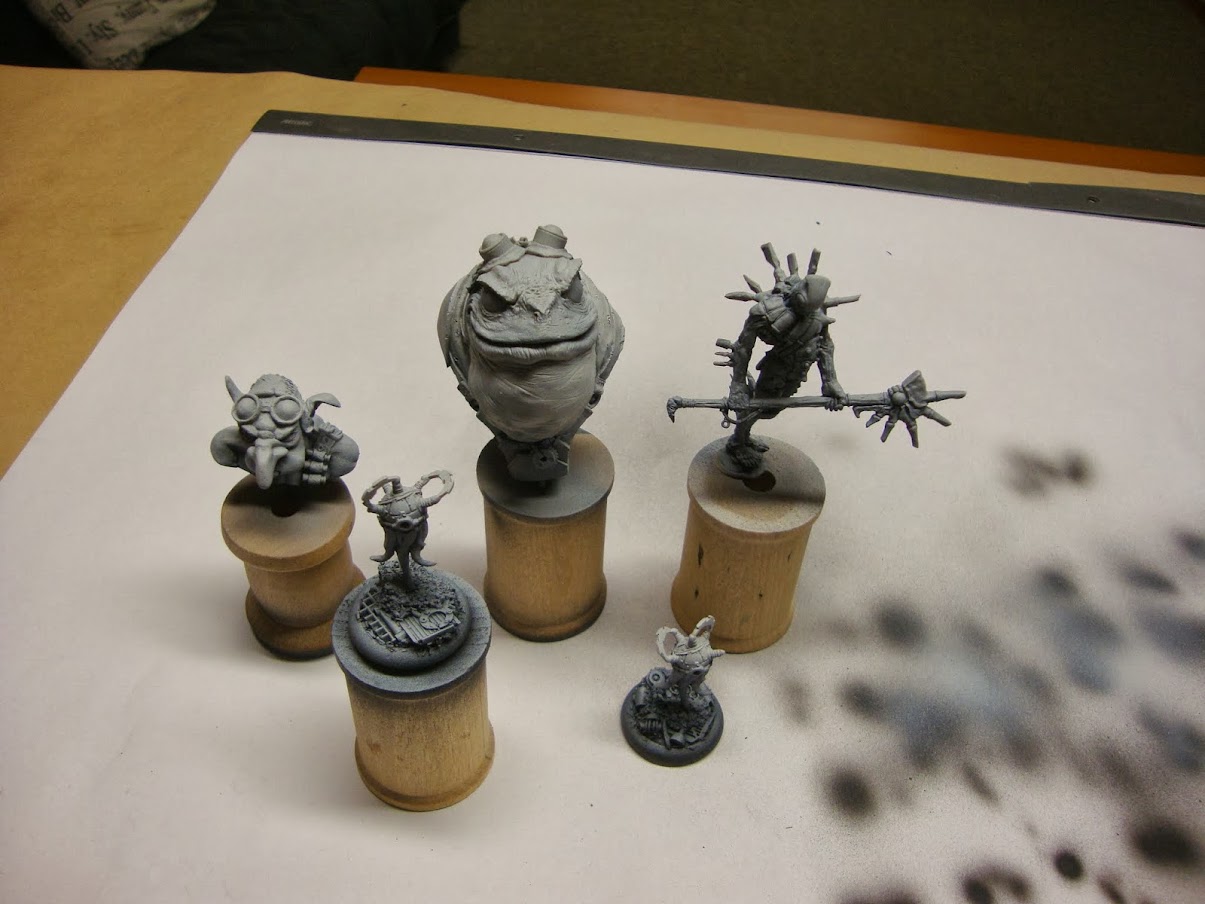 Followed by a touch of white primer.  It's only apparent on Sapo, but everyone got it, with the exception of Mean Jellybean, again, since the high points on that model will probably actually be painted in dark colors, maybe even back to black. 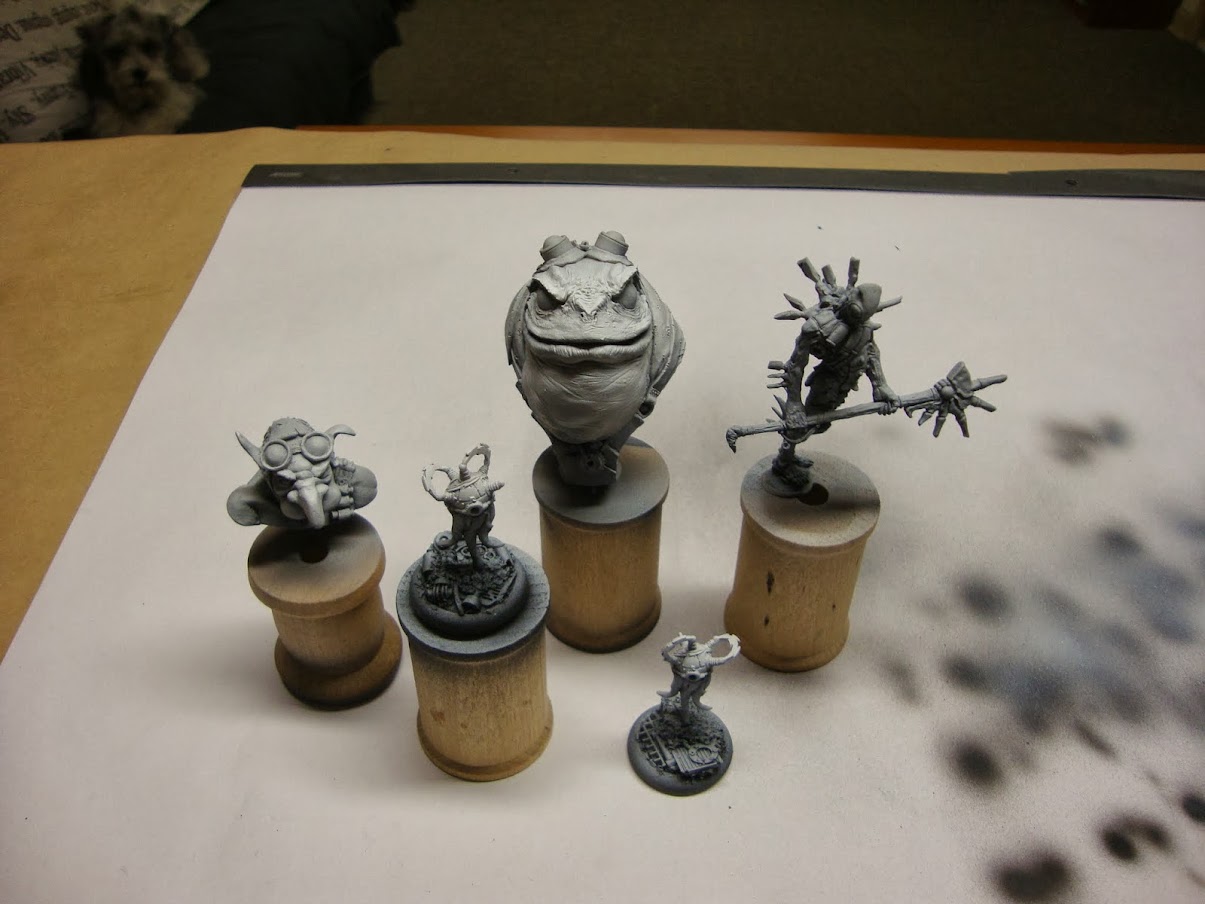 Here's where things get interesting.  This is the first time I've actually tried airbrushing a figure with color. 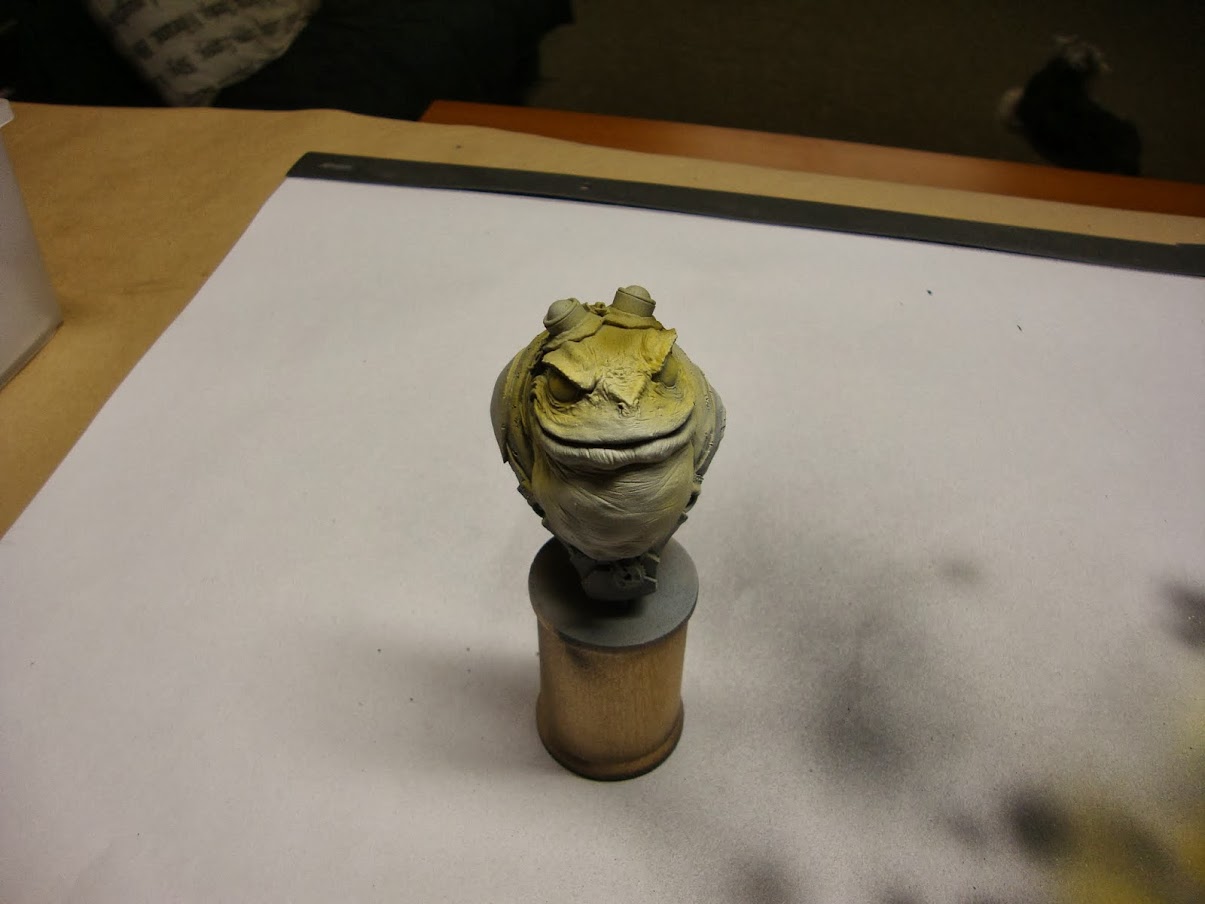 This is under even light, roughly.  The shading is mainly from the primer layers.  This makes a great basecoat, on which I can build with the brush. 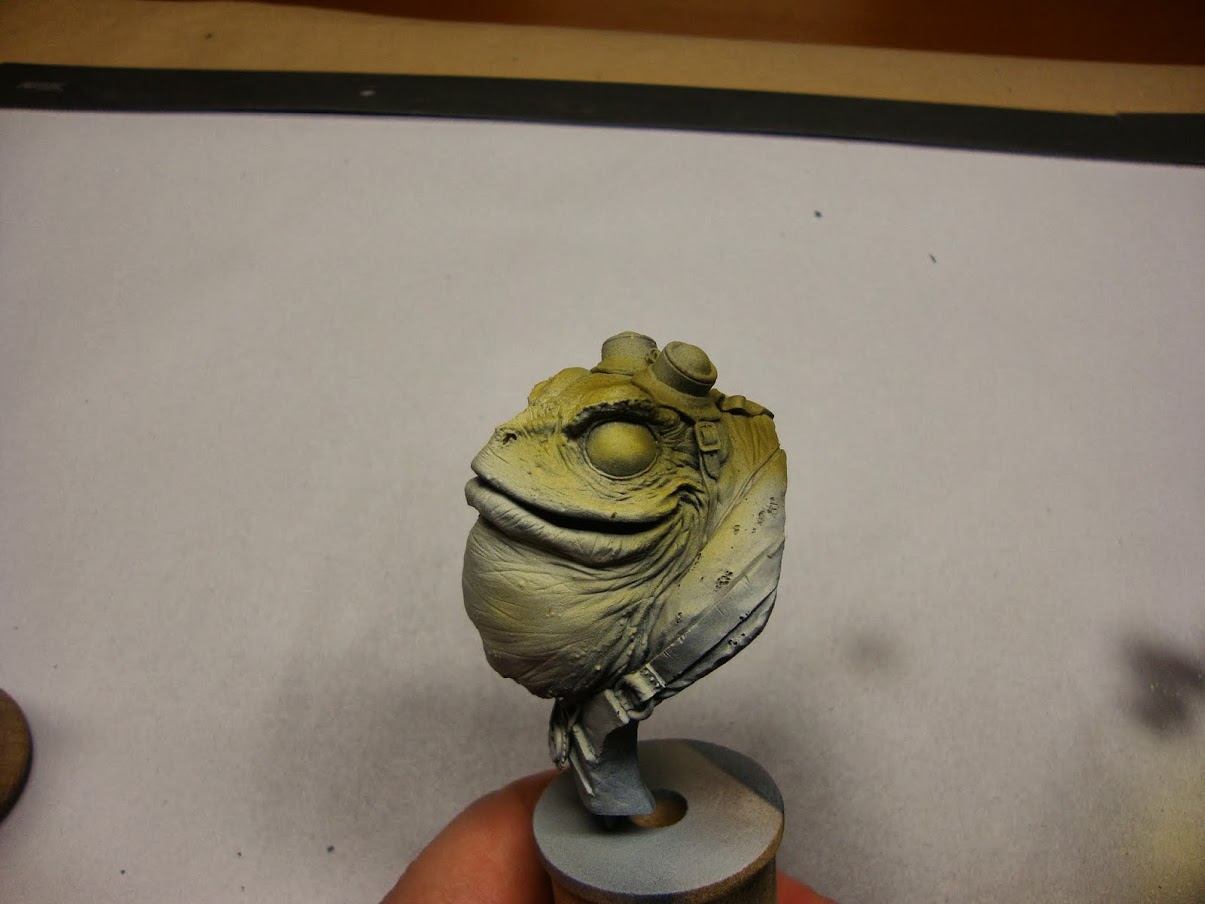 Kind of a cool transition of yellow to olive. 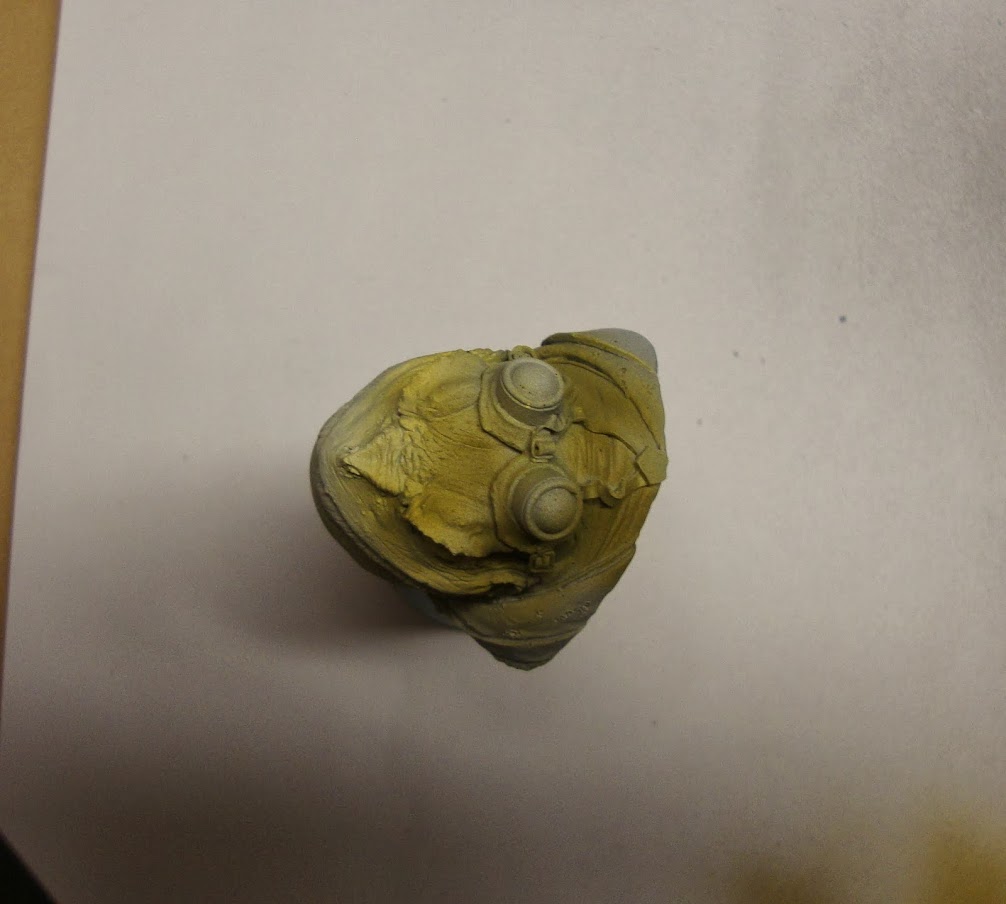 I don't have the control/experience/skill to actually [I]paint[/I] with precision with the airbrush yet.  I'm just blocking out areas in color still, much like priming.  It's good practice, though. 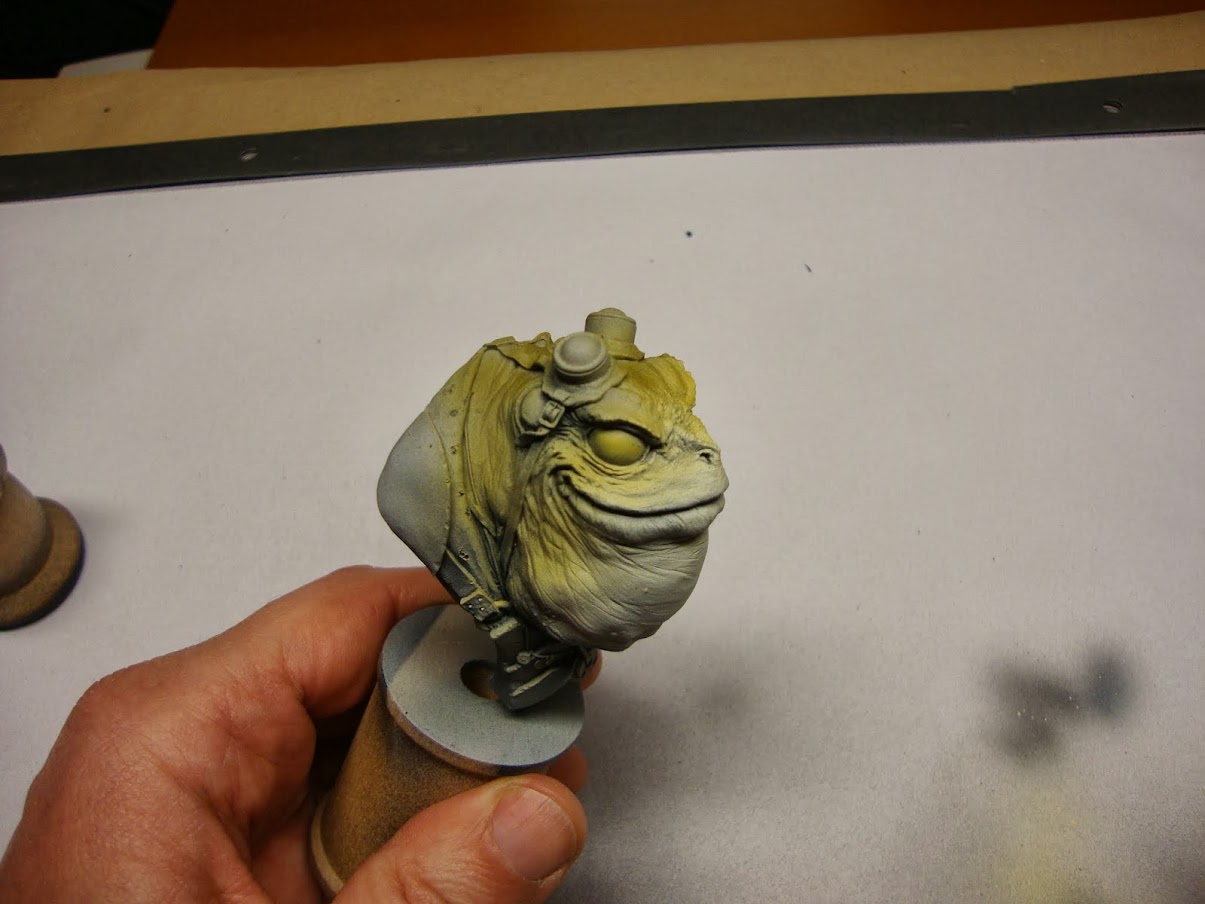 What's wrong with this picture?

Well, this will stop a project dead in its tracks.... 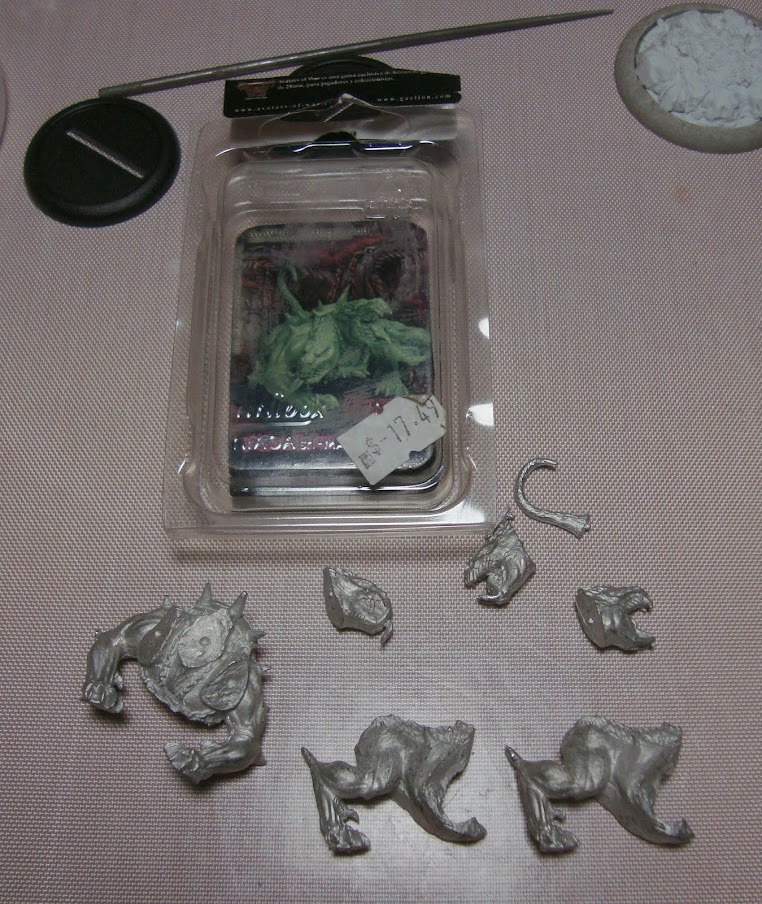 Answer:  there are two right halves of the body.

And I only realized it after spending an hour cleaning and filing the model, when I started dry-fitting the pieces.  Lesson learned:  dry-fit first.

Avatars of War replied to my query concerning the mispacked Cerberus, and they say they're going to send me a proper body half.  Yay!  Unfortunately, it will probably take a few weeks to be shipped from Spain.

In the meantime, I have a Dirz Cerberus from Confrontation that I can use instead.
Posted by Mike "Shades" Schaefer at 6:53 PM 2 comments: