My hobbying has been very sporadic, thus the long wait for an update.  I finally finished my upgrades to my Fishermen team for Guild Ball.  I now hope to have a lot more tools to deal with my regular opponent's Masons team.


I was tempted to do some freehand on one of Sakana's sash and on Corsair's trousers.  But I decided against it because 1) I'm pleased with how they look as they are, 2) I worried that the detail would be distracting, and 3) I'm ready to move on to other projects!

Gaming has been sparse, while my regular opponent, Chris, moves house.  But I did manage to fit in a game with some of the local wargamers, who are rising to the call of Frostgrave.  One gentleman, Jeff, has a fully dedicated gameroom, with walls smothered with thematic classic treasures, such as a replica of Frank Frazetta's Death Dealer, art prints from Magic: The Gathering, flaming knives, and shelves full of Warhammer kits.  Here's the sweet Frostgrave table he mustered for us: 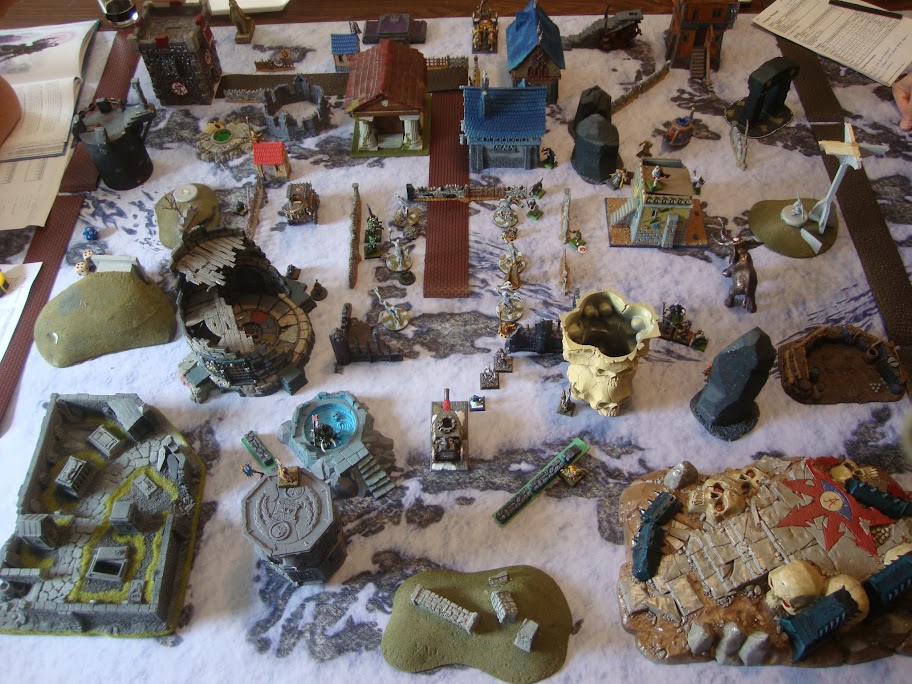 The scenario we played is The Living Museum, where a hall of statues come to life, when you attempt to steal their treasure.  Joe brought some models that he made specifically for the scenario.  Here, you can see the moss-covered statues coming to life and beating the snot out of the thieving warbands. 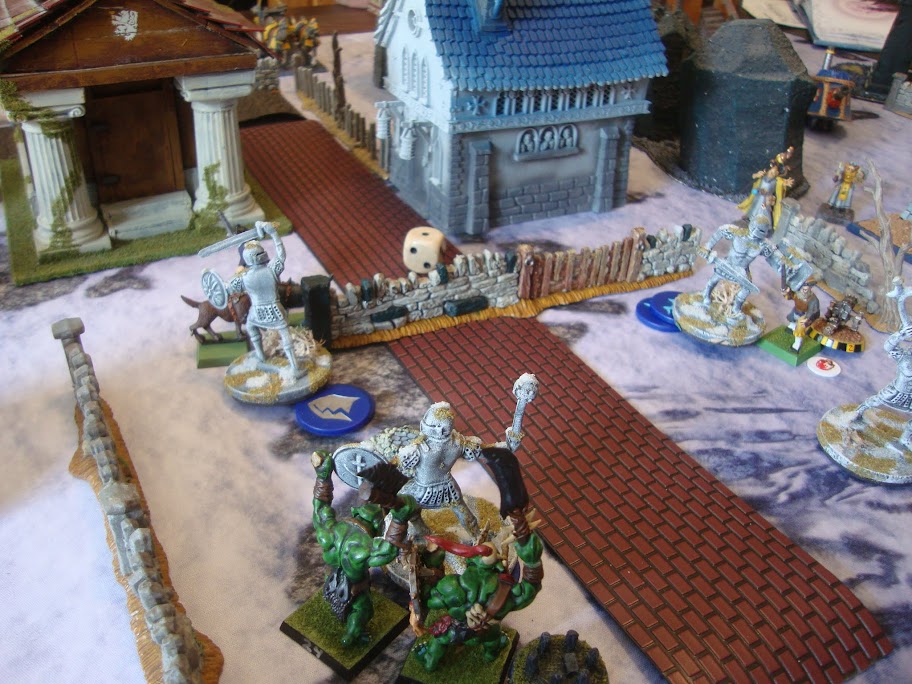 With the sun at his back, my goblin archer, Nod, has a perfect sniping position.  Nod made the mistake of later leaving his perch, and he took a grievous head wound from an enemy orc's axe.  Luckily, Nod's copper helmet saved his life, but he'll have to miss the next game. 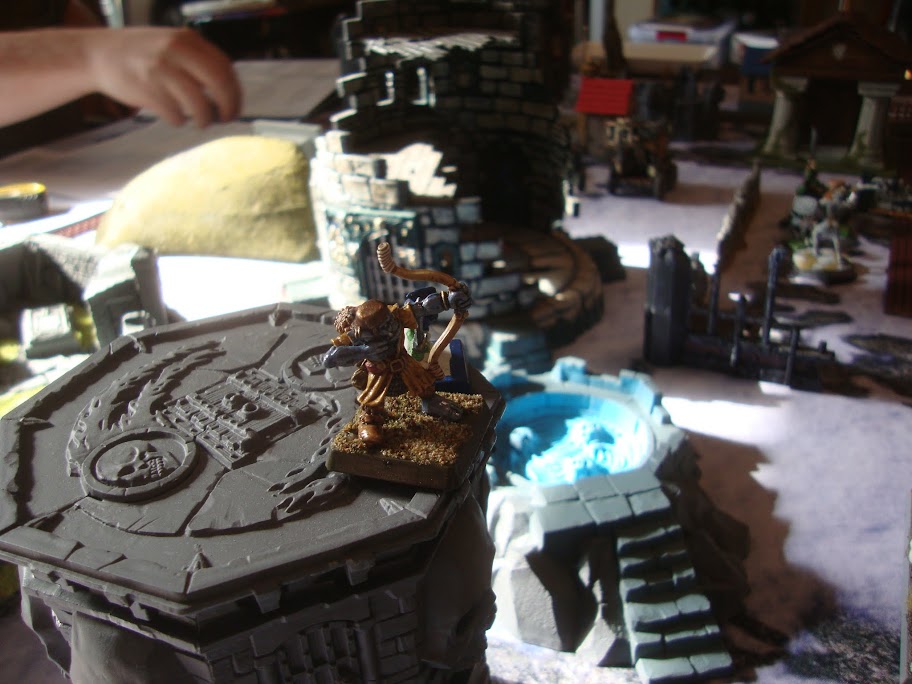 Jeff's Crossbowman was his MVP, killing 3 or so of my warband.  He killed the first one by just beating him over the head with the crossbow in hand-to-hand combat! 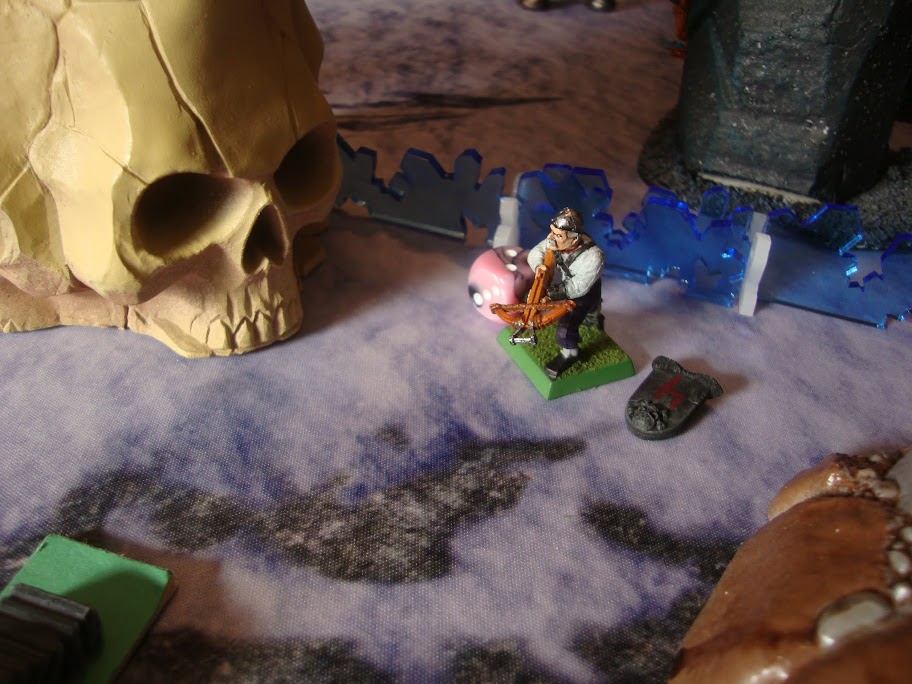 It took a lot a massive expenditure of firepower, but we eventually took out the bastard.  And he ain't coming back either.

Speaking of firepower, apparently my casters, Old Man Tumbergrumbler and his apprentice, Laddy Boy, don't have any.  There were probably a score of spell-casting attempts between the two of them, and only 4 succeeded!  They suck.

And Laddy Boy suffered a Smashed Leg, so he'll be limping from now on.

The boyz recovered only one treasure chest, containing one grimoire and 90 gold coins.  A pitiful haul, relative to the other warbands, but it will at least pay to fill the slots left open by the two injured gang-members who have to sit out the next game.

Frostgrave is a blast, and I'm glad it's entered the rotation for the local crowd.  The game is a good introduction to the hobby, and we'll run demos of it at the monthly game-night at the beer-tavern to see if we can grow our community.